REPEL ANTS IN THE GARDEN

More than 13,000 ant species are known worldwide. In Germany, about 115 species are found. Commonly found in our gardens and on lawns are the black path ant (Lasius Niger), the yellow meadow ant (Lasius flavus) and the red garden ant (Myrmica rubra).

Winged ants are not a separate species, but sexually mature females and males on the nuptial flight. This lasts only a few hours, after which the males die, the females get rid of their wings and either establish their own state or return to the previous nest.

Ants in the house and garden

Ants prefer to lay their nests in dry, uncultivated soil. They are found under patios, on stone walls, in planters, and on lawns. They rumple the soil, destroying its structure and thus impairing plant growth.

Although they carry out useful activities (decomposition of plant material, dispersal of plant seeds, re-sifting of soil), they are often a nuisance near the house. Moreover, they sometimes make life difficult for gardeners. For example, they protect aphids from being eaten by their natural enemies, such as ladybug and lacewing larvae.

Also on lawns nemaplus® Ameisenfrei must be poured directly into the nests. When poured over the entire lawn area, the nematodes do not get deep enough into the soil to reach the nests.

To use the nematodes in a targeted manner in the fight against ants on the patio, the nemaplus® ant-free set is suitable, which also contains a syringe in addition to the beneficial insects. After mixing, the nematode suspension can simply be drawn up with the help of this syringe and can then be injected very precisely into the holes of the ants.

To control ant colonies that extend along a house wall, it is recommended to use a watering can with an application rate of 5 million nematodes per 2 linear meters.

In order to remain permanently ant-free, the treatment with nemaplus® Ameisenfrei should be repeated after six weeks. Overdosing is not possible.

nemaplus® Ameisenfrei works only against ants and insect larvae in the soil and is completely harmless for humans, domestic animals and plants. Earthworms are not harmed.

Repel ants from your garden and terrace with nematodes 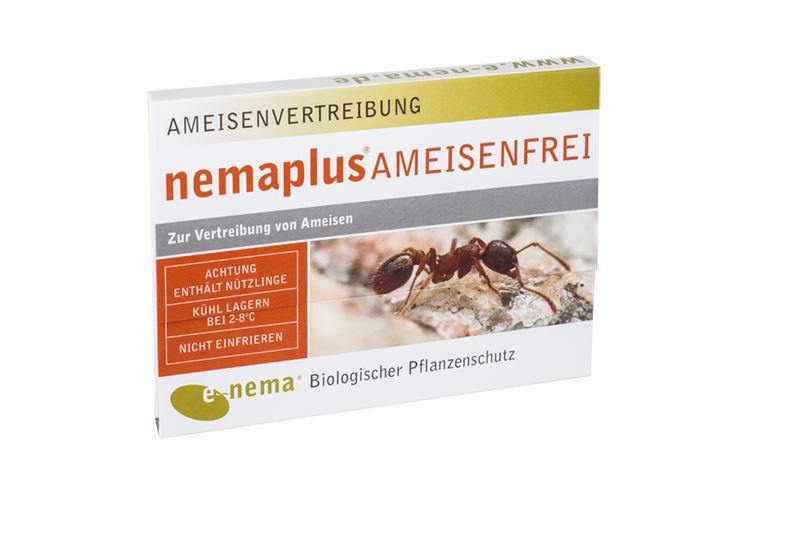